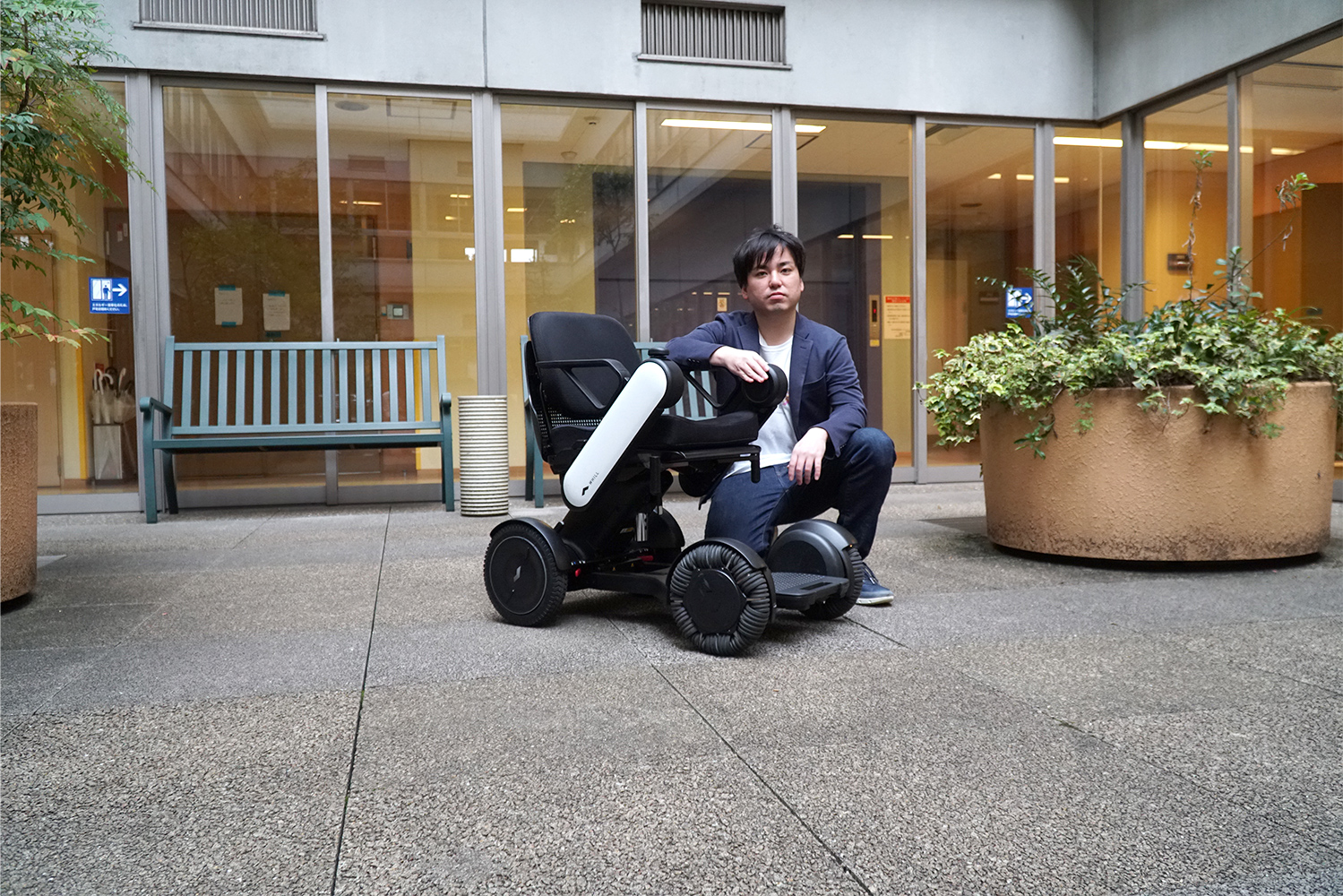 Striving to achieve image renovation, and increasing options for smart mobility through MaaS

The following is the second half of the interview with Mr. Muneaki Fukuoka, CTO of WHILL, Inc.

In the first half of this interview, scoldings from wheelchair users that led to the company’s founding and days of frustration in attempting to overcome high barriers were mentioned, and in this second half we will touch on the company’s commitment to their products and their prospects for the future.

Our mission is “Delivering Fun and Innovation to Pedestrian Travel” and we are creating a new style of movement in the global pedestrian fields. The company was established in Japan in May 2012, and expanded to the United States in April 2013 and to the Netherlands in August 2018. The major pillars of our business are personal mobility and MaaS.

A product that looks cool and performs cool, and embodies image change

− Seems like you were keen about the design from the beginning of development.

Indeed. Our products have been developed with the desire to change the situation where wheelchair users are perceived as “people who should be protected” from others as well as the users themselves.

Our CEO, Sugie, was originally a car designer, so there was no compromise in making cool vehicles.

− For example, what are some of your particulars?

In terms of appearance, this oblique line is a key essence. 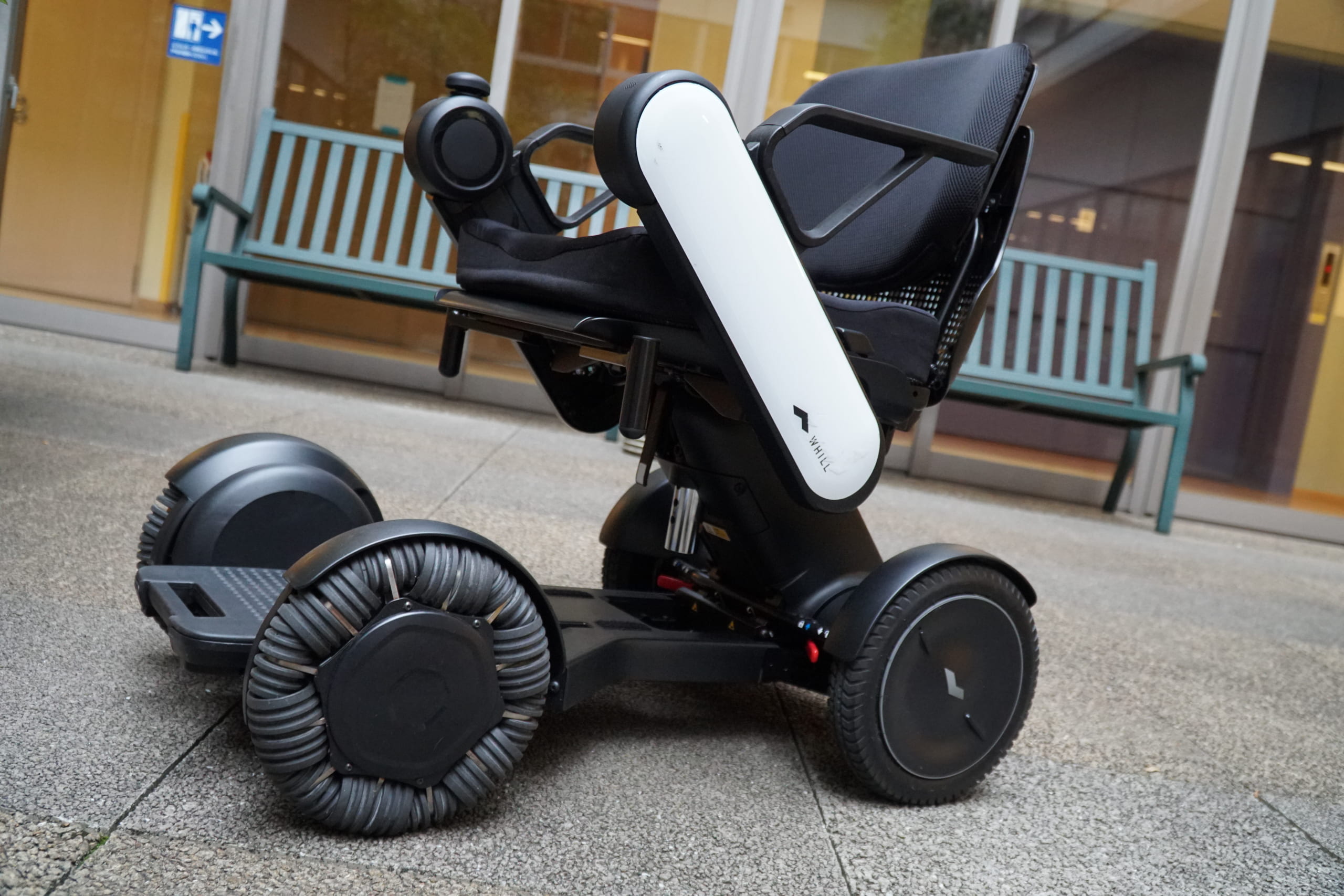 The rounded design without corners expresses usability and familiarity, while sharp lines incorporates sophisticated and stylish elements. These have been included in our design philosophy since our earliest models.

Also, in order to overturn the presumed image of conventional wheelchairs, we think that it is necessary to make differences not only in the appearance but also in the functions.

Therefore, in terms of functions, we adopted the omni wheel for the front wheels of the tires, so that we could achieve a comfortable ride experience that would not make users want to get off. 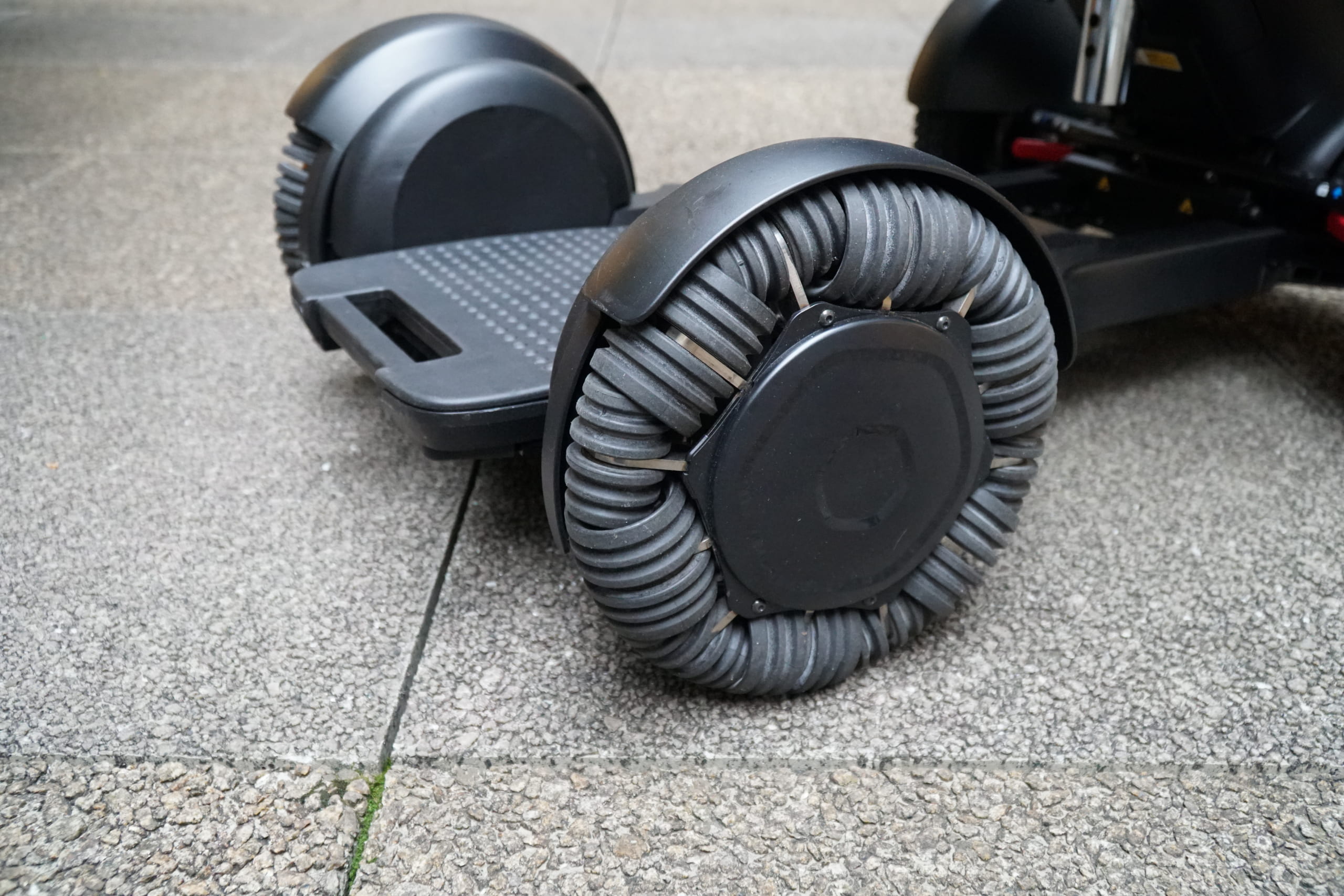 The front wheel is enlarged to climb over a step, and the design is made to maintain the mobility of small turns. Several wheels are combined, and the tires that move in the lateral direction are also configured at the same time, making it possible to perform detailed operations. This point is improved each time a new model is released, so that the intuitive operation of the user is more accurately reflected in the movement. Self rotation is also possible.

Check out the tire movement.

Liberation from “May I help you?”

− You have strong determination. What kind of responses did you receive?

We conducted field trials to expand to the US market. I asked local wheelchair users for their thoughts from the trial.

The feeling that your dignity is impaired through the use of wheelchairs, as mentioned in the background of our founding, is not limited to Japan, but can occur in any country. A few users did frown upon our product when they first tried it out. However, when trying out the product in the field, they mentioned that passersby commented “Cool!” several times.

That’s right. Through such comments, test users were quite pleased and seemed very happy to be able to say “I feel potential in this product.” This was the moment we realized that how something is perceived by others, or simply how cool something is, is a key factor when using a product.

We’ve also heard voices like “if it’s WHILL, I’m willing to ride on”, and episodes that someone went out to his/her garden for the first time in 20 years. Delivering such products can sometimes bring users to tears, which is what makes us proud.

Creating new experiences as a service that goes beyond hardware sales

− What are your plans for the future?

Until now, we had a classic business development as a manufacturer, but in the future we want to move to a new business model as a service company. Specifically, MaaS business. Japanese electronics manufacturers have created the slogan “From entity to situation”, and the trend is changing their business execution; this is exactly what we are aiming for, at a very fast pace.

There are various ways to do this. For example, in one of our recent projects, field tests for automated driving are being conducted in cooperation with five domestic and overseas airports. Once we can prove that the burden of moving around in airports has been reduced, and if we have accumulated user data, we plan to roll out field trials in the streets.

When you are shopping and your luggage is heavy, or you are simply tired of walking, just launch the app and WHILL will come pick you up by autonomous driving and carry you home. Such a world isn’t just a dream.

Changing the notion of “people in wheelchairs”

− That’s definitely not the same as using a conventional wheelchair!

Exactly. Speaking of wheelchair users, people will probably imagine those who have been injured due to traffic accidents, or those who have grown old and have weakened muscles. However, the definition of a person who experiences movement difficulties should be more wide-ranged, including slight problems such as a joint ache.

Sure I can walk, but honestly I’m lazy. If possible, I want to get home by riding some kind of vehicle at a reasonable price. In the future, we hope to create a service that can be used by such potential users.

Until now, we had been renewing the image through hardware, but in the future we want to combine it with our service message and spread our hopes for the view of our world. Ahead of our current field tests at airports, we are aiming to deliver our service at hospitals, shopping centers, and urban smart city development.

− The movement outside the home is likely to change! Wrapping up, please tell us what you can expect from us venture capitals.

What I felt during our startup phase was how much one can concentrate on the core parts of business was important in the early and mid-term stages. So, knowing this is quite selfish, if I could be freed from all back office work I would have been quite thankful.
If you have such expertise and knowledge, it will be helpful if you can provide such support.

I’d also be happy to be provided with hard-to-get connections, as well as staffing support.

However, to be honest, beyond such generous support, I feel more reassured through timely and pinpoint support to both apparentand hidden issues. It’s ideal to maintain a healthy relationship, all while driving problem-solving.

− It’s important to take care not to increase the burden on entrepreneurs. We also hope to keep this in mind!